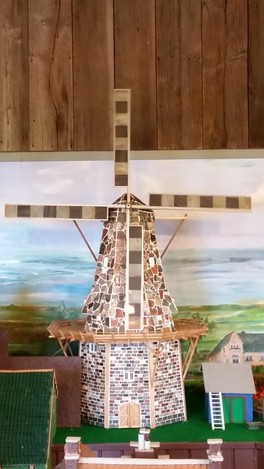 Scale Model of Holland’s Windmill, “De Zwaan”
Our first member-involved Club project in the 1970’s was producing a scale model   of Holland’s iconic windmill which was brought from the Netherlands in the1960’s.
The construction was designed and overseen by Ev Duester and Don Lake with enthusiastic contributions of material and labor from all. The donated material was high graded, cut and shaped. The lower half of the wooden framework was covered with ½” x 1” stone “bricks” of larvikite, sodalite, kona dolomite, unakite, jaspilite, banded onyx, petrified wood, etc. The upper portion was covered with Michigan’s own septaria and the sails with thinly sliced Brazilian agate alternating with flow obsidian. It was engineered with an interior light and sails that rotate! The mill was featured in several club shows and written up in the May, 1980 issue of Lapidary Journal. It resides in the “Little Netherlands” building on Windmill Island.
​ 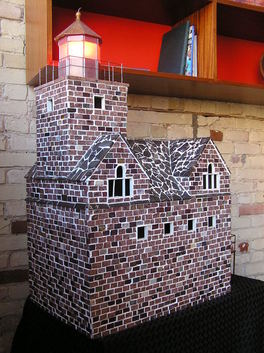 
"Big Red” Lighthouse
A few years later, a second project was the construction of a scale model replica of “Big Red”, an iconic feature in Holland’s harbor. It is three feet tall and weighs 55 lbs. The body of the building is covered with 1¼” x ½” “bricks” of granite, jasper, and agate glued to the framework. The roof tiles are composed of thinly sliced septaria and the turret roof of copper brick. It has an operating light to guide any possible passing ships. Big Red is on long-term loan to the Michigan Welcome Center near the Indiana border.  A plaque tells about its construction by our Club.  As the time for our Annual Show approaches, flyers are available for visitors to take from the promotional rack.
Individual Member Educational Presentations
 Coaching Science Olympiad students
 Working with Boy Scouts on specific rock related badge requirements
 In-classroom and in-home sharing of rocks and hobby related collecting experiences
 Displaying part of personal collections in libraries
 Providing rock related programs at public library summer reading programs
Ottawa County Park petoskey stone polishing event 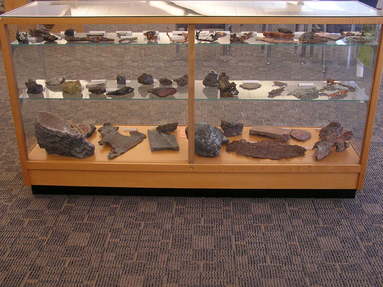 ​Joe Moran Memorial Collection of
Michigan’s Upper Peninsula Minerals
This permanent exhibit of some of the finest specimens collected by Joe and Dorothy Moran is displayed in Herrick District Library. Donated by their daughter, Nancy Moran Johnson, it includes specimens her parents collected in the Iron Range near Ishpeming and Negaunee as well as Copper Country minerals from the Keweenaw Peninsula. Joe, a devoted rockhound and City of Holland Recreation Department Director, founded our Club in 1967.

Scholarships
Hope College & Grand Valley State University: As part of its educational mission, our Club has provided scholarships annually since 1975 to geology students. The awards are presented by the Club at our April Banquet to which the students, their families and the geology professors are invited.
Joe Moran Memorial Geology Scholarship: A scholarship may be given to recognize a Junior Club member whose college study program will be directed toward a career in the geosciences. The student must be graduating from an area high school in the current academic year and planning to enroll full time in a bachelor’s degree program at an accredited higher education institution in the fall directly after graduation.
Norman and Helen GibsonGeology Field Study Scholarship: This Scholarship was created by the family of Norm and Helen at Grand Valley State University and has been fully endowed by the family, faculty and the Tulip City G & M Club through their donations.  The recipients are chosen by Geology Department faculty and the winners often present programs to the Club at a General Meeting.  Ongoing donations increase the size of the Fund, making it possible to benefit more students.
​
​ 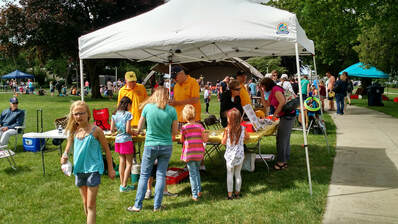 HerrickFest
Our Club participates in Herrick District Library’s annual festival spotlighting community non-profit organizations.  We display a variety of our State’s rocks, minerals and fossils, as another way of extending educational outreach. A free sample of a labeled rock or mineral in a small plastic bag is given to each student visitor.  In 2000, this event will take place on Saturday, June 6th from 10 until 2 at the Park Township airport, 1269 Ottawa Beach Road at the corner of 152nd Avenue.

Annual August Tailgate Sale
Club members and rockhounds from other clubs set up in a one day event at a site in Holland, with rock related material for sale. Admission is free.

​Memorial Book Contributions
For many years our Club has recognized deceased members by contributing newly purchased books that relate to that individual’s area of interest in our hobby to two local public libraries; Holland’s Herrick District Library and Zeeland’s Howard Miller Public Library.  The libraries process and catalog the books into their collections, making them accessible to the general public as well as Club members through the library on-line catalog. A book plate recognizes the individual being memorialized as well as the donor name, Tulip City Gem & Mineral Club.
Annual Gem & Mineral Show
Each September since 1970 the Club has held an annual show focusing on educating the public about our hobby. Features of the show include exhibits by members, demonstrations in the lapidary arts, a silent auction, club sales area, games for kids, a display of touch rocks, a fluorescents booth, and an information table for rock identification. Elementary classes as well as home schooled children are encouraged to attend Friday at no charge.  Nearly a dozen dealers sell retail goods from  fossils, polished rock art, mineral specimens, finished jewelry as well as jewelry makings to geodes you can have cracked open. 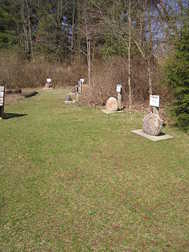 ​ Geology Trail at DeGraaf Nature Center
In 2003, the Board of Directors received permission from the DeGraaf Nature Center to develop a Geology Trail at this Holland City Park, and began the purchase and solicitation of specimens. By Spring 2005, eleven large rocks were gathered and installed by Ken Hoekstra and Bob Sherwood on concrete platforms. Identifying signage was added near the rocks and a handout pamphlet was made available at the Center’s information desk. Eleven years later the signage was upgraded and a larger “Introductory” sign was installed. The Club lends a hand every year or so to prune back shrubs and do major weeding around the platforms. 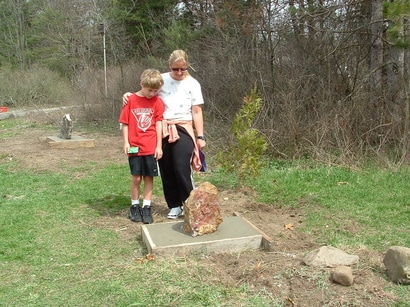 A mother and her son walking by as we were preparing the site.
This specimen, "Christmas Agate," was collected at the Marston Ranch, Ashwood, Oregon

​         Ken Hoekstra and Bob Sherwood working to get the form
and the rock just right before adding concrete.